Until America comes to grips with the deplorable job that our public schools are doing for our children, the country will continue to fall behind the remaining industrialized nations of the world.

In 2006, Stamford University mathematician, Kevin Devlin, analysed the The Programme for International Student Assessment tests of 15 year-olds. The testing was undertaken by the 34 member-countries, of the Organization for Economic Cooperation and Development (OECD) and the results were chilling.

Devlin wrote, “In 2006, American students ranked dead last, 25th out of 25, in math and 21st out of 30 in science. The U.S. also scored worse than ranked countries outside the OECD (considered to be developing nations) like Russia, Azerbaijan, Slovenia and Estonia.

Only 1 percent of American 15-year-olds could perform at the highest level, and 27 countries had a higher percentage of 15-year-olds who performed at level 6. And 28 percent of U.S. students appear to have essentially no math skills at all.”

This is a reflection of the steady decline in our children’s test scores since the unions, (which are an extension of the socialist arm of the federal government’s views of student as defined by the U. S. Dept. of Education) began to interfere with our teacher’s abilities to educate their local students in a way that they saw fit.

The unions have destroyed the sincerely concerned school administrator’s ability to demand higher standards of behavior, and by association, higher levels of learning, from not only the students, but from the teachers as well, by insisting instead, on broad-based (irrelevant), generalized and weak performance requirements for, and from, teachers. 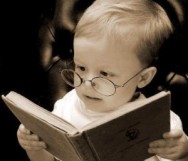 I can’t wait to go to school! Too bad he’s only guaranteed to learn to use a condom.

Until the corrupt unions, and the busy-bodies from USDE, are removed from the educational system, and strict discipline is enforced, for both students and teachers, the country will continue to be denied the contributions of our brightest students. Our brightest students, who are now lost in the mire of politics and political correctness generated by the totally disconnected, and self-serving priorities, of the unions which are backed by the socialists in the Dept. of Education in Washington, DC.

But, worse yet, the children will continue to be

short-changed themselves while they continue to be denied the good teachers and good education they deserve. And strict discipline is the key to the success of both.

Devoid of any sense of discipline, the inner city students suffer the most. Education is impossible without personal restraint based on good discipline, and good discipline can only be attained when children are raised to respect others, which the union’s demonstrating,and striking, teacher thugs fail to display themselves.

Our dysfunctional educational system is just another example, right behind the legalization of abortion and the proliferation of divorce, of just how stubbornly American women refuse to place children’s needs at the top of their priority list. The “me generation” of female baby boomers are the very worst offenders in this matter.

Within our public education system, the National Education Association (NEA) and the American Federation of Teachers (AFT) unions (supported by millions of female teachers) have become the biggest obstacle to our children’s academic success.

These pushy union thugs are only interested in more cash, not the smart kids. And this, despite the fact that teachers are some of the best salaried individuals in the country, especially when you factor in their healthcare packages, pensions, bonus’, vacation days (including the whole summer) and the ideal work hours (M-F 8-3).

And yet, it’s never enough. These creeps continue to demand and push to expand their already cushy lifestyle that the union thugs have provided for them. All of which is at the expense of the students, and the taxpayers, who are not getting their money’s worth.

Hard to believe? The next time you drive by an elementary school, count the Mercedes, BMW’s, Lexis’ and Volvo’s in the parking lot. Luxury cars that are being purchased on a teacher’s salary.

But, despite their largess – it isn’t enough. They always want more concessions and more money and this, despite the fact that our students continue each year to slide backwards academically, when compared to the rest of the world! Our children are being held hostage to these unprincipled thugs.

The unions (socialists) have only exasperated the discipline problems created when prayer was removed from our public schools in 1963.

When this disastrous, and destructive, omission was made law, the Christian children, who comprised 95% of the students in public schools, were denied more than their right to religious freedom and expression. They were also denied a vitally important, structured, orderly and peaceful environment in which to learn. This ideal setting, for learning, can only be produced when both children, and teachers, embrace the personal restraints, and responsibilities, as defined by their adoption of the tenets of Christian behavior, including personal responsibility, respect for others and polite kindness to all.

Not only does the personal discipline, demanded of Christians by their faith, provide the structure and basic parameters for good behavior, it also stems the tide of societal chaos, which will aggressively fills the void left behind.

These thugs show absolutely NO restraint, while screaming, yelling and cursing, during their “walk-outs.” Their displays of civil disobedience has made it nearly impossible for those same union teachers to demand better behavior from their students, because they themselves behave like out-of-control, screaming, banshees during their protest marches!

As for the vulnerable good children, who witness the radical, unionized “teacher’s”, despicable misbehavior? For them, there is no hope for any discipline within the classroom, because the rebellious strikers of yesterday, are simply viewed by the bad students as disciplinary hypocrites of today.

As a result, school children, in general, no longer behave according to the high standards of behavior once expected of them by their Christian faith, and their Christian teachers, because their secularized female teachers are leading from behind.

Are kids encouraged to think in an orderly manner with disorderly walls and desk placement? Why promote confusion? If kids all faced front, you wouldn’t need 2 teachers.

As a result, the children now lack the Christian, and very personal, element of self-discipline themselves and can no longer sit still long enough to be taught. And the result? We now need one teacher and two aids, to teach just 28 children!

In 1964, my 8th grade class, in a Catholic elementary school in New York, was composed of 72 children. And yet, we were taught by one Dominican nun, that’s right ONE NUN, because discipline ruled the day. We all knew that we were there to learn, not to play, and certainly NOT to be entertained.

Unfortunately today, the quiet contemplation, focused concentration and self-control, which are necessary to learn, have all but been irradiated from the classrooms of our public schools. And worse yet, this disaster was self-inflicted, by unionized, feminist, baby-boomer educators!

We, as a country, are losing our competitive edge. We are losing the battle for our kids intellects, not only because we have lost our ability to quietly pray, and thereby quietly learn, but because the unions have placed themselves between the teachers and their students.

Even today’s good teachers are compromised in their efforts to do what they know is right for each individual student within their care, because they are not permitted to act on their instincts. They can’t even touch the kids!

They may know how to address the needs of their problem students but, they are not permitted to act on those instincts because their hands are tied by federal regulations.

Teachers are even denied the ability to truly care for their students. Everything must be done “by-the-book” (a book some know-it-all wrote in faraway D.C.), thereby denying some students the personal, hands-on, attention necessary for them to truly learn.

ONE teacher for all of these well-behaved Christian children

No one can learn, or teach, in an adversarial, disrespectful or contentious environment. And yet, this lack of discipline is actually encouraged by the undisciplined union members and their lawyers. If the teachers don’t get what they want, what do they do? Correct! They yell and scream and threaten to “walk-out.” How can they expect the students to act any differently?

And ironically, what-comes-around-goes-around. If a teacher has the nerve to criticize, or reprimand, a kid, despite his good intentions, he’ll probably end up in court and be hung-out-to-dry by his socialist union.

“SIT DOWN!” I can’t stand this anymore.

And so, the truly good teachers who take their students needs to heart are left hanging. Many finally quit. And as the schools continued to become more chaotic and unruly, more good teachers continue to quit, until nothing but the garbage is left behind.

As a result, today’s schools are awash with teachers who graduated, at the bottom of their classes, rather than at the top.

Radical, second-wave feminism has also taken its toll on the quality of our teachers, as our academically gifted women have abandoned their traditional roles as teachers, as well. Today, our brightest women become lawyers, engineers and doctors, rather than teachers, and our children are visibly suffering from this profound loss of academic intelligence, as well.

The educational injustice done to our children, every day during the school year, is deplorable. As mentioned earlier, the Organization for Economic Cooperation and Development (OECD) assesses 15-year-old students academic performance among nations.

This is not only a national disgrace, it will destroy America’s ability to sustain its position as the leader of the free world.

In 2015, our students test scores hit rock bottom! According to the OECD, the American Millennials, or Gen Y, (ages 15-35) are the least skilled students the country has ever produced! Not only does this age group lag behind other country’s students, they lag behind other age groups of Americans!

We, as a country, must stop treating our educational system as though it were a sacred cow! It is NOT! It is, in reality, a mess!

We must admit that it is, instead, an abject failure and a dysfunctional disaster and that nothing will improve without admitting to the public school system’s severe, and rampant, short-comings.

The institution of Common Core standards in 1990s did nothing to advance our students academically, and the latest version is even worse as it espouses to brainwash our children farther away from our great Christian country’s enormous contribution to the world. These standards are generalized, anti-American, anti-Christian, socialist, one-size fits all BS generated by busy-bodies and know-it-alls, like Bill Gates and Jeb Bush. It is just more tyrannical governmental interference from afar!

We are now coming to the end of the road and are now the laughing-stock of the world academically! We cannot continue to rest on our laurels as the ship sinks!

There is no excuse for our pathetic academic standing, as compared to other countries, other than the destructive interference of unions/socialists and the federal government.

These despicable operations have institutionalized bad behavior, bad academic performance, bad teaching techniques and bad students. They have ham-strung the very people who could save our schools, the non-union, administrators and superintendents of our public schools, most of whom are Christian men!

We must stop the socialist unions, the federal government, Common Core and the anti-Christian USDE’s, catastrophic interference with our public schools. Everything they have proposed, enacted and enforced has FAILED to produce better and brighter students!

Christian parents – stand up for your children’s educations! Tear down the federal government, NEA union barriers, and kill the sacred cow we laughably call “school” and watch your kids excel.

It’s the Women, Not the Men  to be continued…