Women do not associate money primarily with security. Men do. For women, having a continuous supply line of cash is a means to an end, rather than an end, in and of itself.

For most women it is of no value unless it is being spent, dispersed or redistributed in some manner. Men vehemently disagree with this approach. They would rather hold onto their cash for a rainy day or in case of an emergency. They want to save it, not spend it needlessly. Unlike women, men want to keep their cash.

Throughout history women have been the spenders and men the savers. It didn’t matter how much money was involved, the principle remained the same. The men made the money and the women distributed it. My mother-in-law, a woman of modest means, and British Lady Nancy Astor, a woman of the incredible wealth, are perfect examples of this tendency, at the extremes.

Here, take it all!! There’s more where it came from.

Despite the disparity between their standards of living, both made concerted efforts, throughout their lives, to give away everything their husbands had provided them with.

The “giving” aspect of their lives was what was important to both women. Neither undertook these efforts without the full knowledge, and approval, of their husbands. But, in retrospect, both women were generous to a fault and on many occasions that tendency was taken advantage of by others.

And, of course, neither was left homeless as a result of their charitable natures because their husbands prevented that possibility from ever happening, by limiting their cash flow.

So, as a result of their husband’s benevolence, and love, both women viewed the world through rose-colored glasses, convinced they were improving the lives of others through their generosity, when in fact it was their husband’s generosity to them, that allowed the women to become beneficiaries to others.

I can help you – with my husband’s money.

younger purchaser always came first. Even during the good times, they routinely managed to just break even. She shed homes like a snake sheds its skin, buying and selling homes every few years.

Ma had sympathy for the young buyers and always felt the need to help them “move-up.” She had no interest in her own belongings. Ma considered them just utilitarian objects to be discarded when no longer useful. Any “frivolous” gifts, or belongings, were routinely given away as soon as an occasion arose. To my father-in-law’s chagrin, she even refused to accept “frivolous”, code for expensive, Christmas gifts from him.

Lady Astor, although surrounded by great wealth, and luxury, was of the same temperament, only on a much grander scale. Her donations were legendary. She supported her causes, and the

Lady Astor’s philanthropy also extended to acquaintances and their personal undertakings as well. Her generosity, and that of my mother-in-law, would not have been possible if it were not for both of their husband’s quiet approval.

Both of these women were  much-loved by their husbands and although both women spent their husband’s money without concern, their underlying motivation was the great satisfaction they both received from helping others they viewed as less fortunate than themselves.

Women are by nature fantastic helpmates. This innate need among women is universal. In one form or another, it defines most women’s lives. They want to help everyone, and everything, and within certain limitations, they do it quite well. But when left to their own

How did this happen? I’m up to my eyeballs in debt!

devices, unregulated by a husband’s tendency to save, they will “help” to the point of personal financial disaster.

What do you mean there’s no more?

Radical, second-wave feminism liberated women from their inconvenient husbands, fathers and brothers thereby giving women unprecedented decision-making power concerning their financial dealings. Millions of these women have now been given the freedom to take these “helping genes”, unimpeded by cautious men, on the road.

Now, not only do these “career” women have their own money to spend without the need to justify the expense

Deficit spending on the unfortunate. If it feels good, do it!

to husbands or fathers but those same women are now working for corporations, and government agencies, where they spent other people’s money, as managerial personal, in the same expediency!

During the last forty-five years of feminism’s reign, women have given-away-the-store, with the help of unscrupulous socialists, to the detriment of the companies, communities and even the country for which they work.

Most women have no understanding of the value of a dollar. The higher the project’s price tag, the happier they are to spend the money to fund it. They think that if it costs a lot, it must be worth a lot. DUH!

The entire mindset of buying “labels” epitomizes this deep-seeded, mental phenomenon. Are women truly getting added value for the added expense? Of course not. A pair of jeans, is a pair of jeans, manufactured with nearly identical materials, whether they cost $25 or $250. The same goes for cars, purses, shoes, perfume or carpets. These women don’t have a clue about the real value of their purchases, nor do they care. It’s all about the spending, the redistribution of their cash. True value is none of their concern.

Spending money makes women feel good about themselves. Men, on the other hand, feel good 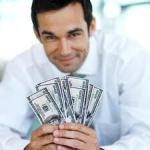 I’m saving it for a rainy day!

about themselves when they make money.

This symbiosis between men and women was always in balance, as long as the men controlled the purse strings. It didn’t matter if she was a guzzillionaire like Lady Astor or a woman of modest means like my mother-in-law. It worked because there was a governor on the woman’s cash flow and he was called husband or father.

What do you mean that I can’t afford to own 3 houses on my receptionist salary?

Today this is no longer the case. Feminism has advocated for women’s  financial independence from men for decades, with the predictable results.

Women are spending themselves and the country into oblivion. During the housing bubble of the late 2000s, they thought nothing of buying three, or four, houses to “flip”, only to get caught when the bubble burst and the housing market crashed throwing many into foreclosure.

for themselves and their dependent children. They took out student loans that they will never in their lifetimes be able to repay and bought cars they couldn’t afford just to impress their friends with their “independence”. They pay babysitters $10, $12, $14 an hour so that they can go out and spend more money!

Today, these same “independent” feminists eat out five and six times a week as though they were millionaires. They spend mega bucks on designer clothes, on a secretary’s salary, and then shamelessly file for bankruptcy, over and over again, when they’ve hit rock bottom.

I am convinced that if the stats were analysed by gender, the nationwide financial crisis we’ve recently experienced, could be traced directly to “liberated” “career” women and their “emancipated”, out-of-control, unchecked, unfettered spending gene.