Did you know that complaining is considered a sign of immaturity? People who chronically complain are not only annoying but they are telling the world that they have never fully matured beyond the fourth grade.

Women, as opposed to men, are notorious complainers. They don’t like the menu items or the ingredients, the weather, the person next door, their co-workers, their mother, their boyfriend, their teacher, their car, their hips, the movie, the wine, the restaurant, the color, the view, the design, the painting, the salesperson, the shoes, the decorating, the report, the temperature, etc., etc., etc……..the list goes on and on and on.

I honestly think that women believe that complaining about everything makes them appear better-informed or superior to the accepting, happy dolts, when in fact, their behavior proves them to be nothing more than annoying, whining children.

It would be a lot more pleasant if women would just grow up. But the longer I live, the less I believe this is possible. I am convinced that women are just tall children and are incapable of full maturation. Oh yes, they can feign maturity for a limited period of time but eventually they can’t sustain the pretense and inevitably regress back to a 10-year-old. 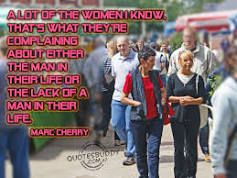 Trying to make a “liberated” feminist happy is pointless.

They have been trained well in this aggravating practice of complaining. When radical, second-wave feminist “career” women, who were unprepared to compete with men on a level playing field, flooded the workforce in the late 1960s and early 1970s, complaining about everything that men had developed, designed or demanded became the norm. This technique, “the best defense is a good offense”, became feminism’s mantra. If you can’t compete, complain. So, today, that’s one of the few things at which “liberated” women excel.

Why would any women choose to follow radical feminism’s twisted way of life rather than Christianity’s? the answer? Because they are just tall, whining, immature 10-year-olds and just like their radical, temper tantrum prone leaders, nothing will EVER make them grow up and be happy. They are permanently damaged goods.

6 thoughts on “Short Essay – Science Has Discovered What Makes Women Happy – NOTHING.”