How many times have you entered a restaurant, a library, a store, a supermarket, a school or a doctor’s office and been

disappointed to find a half-dozen women dressed like pigs? I’m not talking about their wearing a furry, pink suit with pointy ears and a snout. I’m talking about women in tattered, down in the heels, sweatpants. Women in crummy T-shirts and old shorts. Fat women in tight cropped-tops and “revealing” hip-huggers. Women in ratty blue jeans with dirty hair. Women sans make-up, hair-do or jewelry. Women in flip-flops, torn blouses and old peasant dresses.

What’s wrong with these women? Why don’t these women give-a-damn about their public appearance and the reaction from those of us who are unwittingly subjected to their fashion failures?

More importantly, why do female (and male) baby boomers make such ugly, piggy, old people? The answer is

While a senior in a public high school in 1968, the school district caved to the societal pressure, from without, and abolished the long-standing dress code requiring girls to where skirts and boys to wear shirts with buttoned-down collars to school. We had never been permitted to wear blue jeans, sneakers, T-shirts or sweatshirts to school because they were considered play clothes and did not reflect the fact that we were at school, where the serious business of education was taking place.

The following year the kids could pretty much wear whatever they wanted to wear to school, as long as it maintained some element of modesty. The “unisex” look prevailed – jeans, T-shirts, sneakers and long hair. An extension of radical, second-wave feminist’s “gender equality”, fashion statements.

My brother was a 15-year-old in 1968 and what appeared to be a small change in school dress code would prove to be, for him, life-altering, just as it was for millions of other baby boomers.
As young, healthy, beautiful teenagers in the 1960s and 1970s the sloppy clothes appeared youthful and liberating. Just as did every other misguided, liberating, societal change generated by the chaotic demands of the non-Christian, radicals holding America’s college campus’ – hostage, and the news media – spellbound.

relationships, and priorities were all reduced to the lowest common denominator as they sought to become gender neutral.
Where once, high school kids were considered neat, clean and “preppy” adults on the road to a bright future, they were suddenly, sloppy, dirty “hippie” drop-outs, turned-off by a “corrupt” world.

Over a period of just two years, while my brother adopted the new, hip fashions and I stuck to the more traditional fashions, the two of us began to eventually look like we came from two, very different families. To this day, I have only seen him in a suit once and generally he lives in jeans, sneakers and T-shirts.

So, this fashion statement, which was prevalent when the baby boomers were young, is still with us today. It remains the 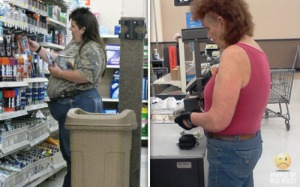 Nothing’s really changed except the fashions. Actually, what has changed is the lack of fashion, especially for baby boomer women. The women who were in their prime in the 1920s and 1950s were exposed to stylish clothes specifically designed for women. And although they continued to wear those same styles into old age, and yes, they were viewed by young people as very outdated, no one could ever say that the older women were still not attractive. Their fashions had aged gracefully with them. Their clothes remained feminine, stylish and appropriate for them. The baby boomers have not been so lucky because jeans, T-shirts and sneakers were never considered true fashion, or for that matter, even female. Thanks to radical, second-wave feminism, insistence that women and men were the same, the fashion industry abandoned the “femininity” of female fashion, which had inspired the industry for centuries.

Even today’s “stars” are slobs!

If dressing like a pig is part of your persona, you better get over it, before your kids don’t want to acknowledge you in public. Not only will you regain some of your self-respect but the rest of us won’t have to be grossed-out every time we, or you, leave the house.