Is the Single-mindedness of CAREER-Oriented College for Young Women a Threat to Christian Family Life?

Dad, when was the last time you told your daughter that she had to get good grades, go to college and find a good job?

OK. Now, when was the last time you told your daughter that she needs to marry a Christian, have lots of kids and love them with all of her heart?

Hummm….. Do you see my point? Who are you working for? The enemy?

Sure, it’s nice to go to college and work but if that’s all you’re telling your daughter, you are unwittingly working for the radical, second-wave feminists, who literally hate your guts.

By pushing your daughter towards a “career” only, you are actually sending her AWAY from you and, at the same time, you’re undermining yourself and everything you represent and hold dear.

Are you giving your daughter mixed signals? It appears that way.

On one hand, you are obviously the most honorable, reliable and trusted person in your daughter’s life and yet, on the other hand, you’re telling her, by inference, that men like you are not worthy of pursuit.

By pushing the concept of “career” only, you are inferring that men are not good enough to be trusted to provide for their wives and children, as loving husbands and fathers, and that your daughters better be prepared to do that job themselves.

So….. rather than think this through, you continue to mindlessly drivel on, about getting a good education and finding a “career” so she can support herself when?….. the creep divorces her and their kids?

Have you ever asked yourself what the hell you’re doing by only giving her one side of the story?

The answer? You are unintentionally sleeping with the enemy – that’s what you’re doing. And, your precious daughter deserves better, much better.

She needs to know that if she ever plans to have children (and despite radical feminism’s statements to the contrary – all Christian girls DO) she will need to marry a young Christian man, who not only loves her, but is capable of supporting her, and their kids, as well.

Otherwise, the happy family life she dreams of will become, for her, a stressed-filled, guilt-ridden, unbalanced and disappointing rat race, as she unsuccessfully strains to “do it all”. 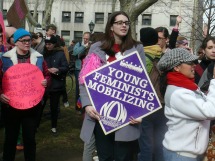 So, Dads, be careful whose “best interests” you are fostering. Upon reflection, they may not be your own.