I ask you this, “Do you remember Eve’s role in our loss of Paradise?” Well, thanks to radical, second-wave feminism, Eve is again in bed with the devil and through these brainwashed women, Christian America is about to become Paradise Lost once more… 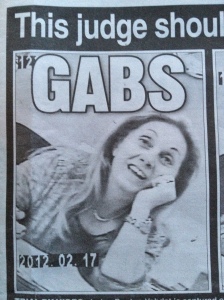 Judge Bushra Vahdat, 53, is the highest-ranking traffic judge in Queens, N.Y. with an annual  salary of $98,000. She is also the supervising administrative judge for the county and yet she routinely thumbs her nose at the rules and regulations by which she is remanded to perform her job.

Last week, she was video-taped discussing the details of renting her house in Martha’s Vineyard, her trip to Mexico, her love of puzzles and her daughter’s Manhattan apartment, which culminated in four hours of wasted time.

And, this was not the first time her propensity to chit-chat, rather than work, was noted.

In 2007, she was reprimanded by state investigators for doing work for a private client, Payless Shoes, while on duty at the courthouse.

Not surprisingly, Ms. Vahdat shows no interest in following the rules because she is a radical feminist and believes the Rule of Law does not apply to her, because it is “sexist.”

So, day after day, Vahdat wastes the county taxpayers money while discussing her personal life instead of her job.

This type of behavior is SO typical of liberated female workers vs. male workers. This distracting din is part of radical feminism’s attempt to undermine the successful institutions established by the goal-oriented “male chauvinist pigs”,  thereby destroying its bottom line, or its budget because “work”is now, “all about her.”

Like all radical, second-wave feminists, Judge Vahdat has been encouraged to disregard the male-oriented system that is in place, and feminize it instead. This usually leads to chaos because the only thing most women can routinely contribute, as an “improvement” to that system, is talk, talk, talk.  By talking everything to death, they inevitably waste tons of precious time, while the polite, male, castrati co-workers watch productivity, and profits, tank.

Millions of radical feminists, seeking “careers”, have been unleashed upon the once male-driven, goal-oriented institutions of government, business, politics, organized religion, judiciary, military and academia, and they are now dysfunctionally awash with misguided, time-wasting, liberated females with an incessant need to  do nothing but TALK.

No wonder text messaging is so popular and non-conversational robots and computers are taking over the world. Everyone is overwhelmed with the non-stop, female yakking, and SICK of it!

Update: Ms. Vahdat was suspended without pay soon after the NY Post published its investigative report on her. Vahdat’s disregard for her superior’ s directives and her continued yakking about her personal life, finally cost her her job. The NY taxpayers should be thrilled!