Here is an article that exposes the truth about the ridiculousness of following a feminist lifestyle. Nobody wins and everybody loses. Especially the innocent little children of working mothers, who have no voice.

Ironically this young reporter unearthed the truth about the difficulties inherent in young mother’s attempts to adopt a feminist lifestyle but she failed to find the only permanent solution to this crisis because, despite her feckless advice, these women’s lives are never going to improve by “writing in a journal”, “taking a walk” or “connecting with friends.” Those are just pointless band aids, recklessly applied to a major surgical wound. Tentative at best and pointless at worst.

Only a complete rejection of radical second-wave feminism’s push to prioritize “career” over family, will absolutely solve this ludicrous, frustrating, and exhausting problem. For mothers of minor children, there is no possible way on earth, to find a “balance” between family life and “career.” This irrational search is an unattainable delusion and unfortunately, neither their “careers” nor their children fare well. They both take the brunt of this irrational fraud called feminism, as neither is given the attention they need to thrive.

So, the only answer is to stop brainwashing young women with radical, second-wave feminism’s ideology and get them back to the roots of their Christian faith instead! Motherhood is for women dedicated to their faith, not feminism’s fraudulent fantasies.

Women must stop believing in the “superwoman” PC BS invented by feminism and get their priorities straight. Their children should be the most important people in their lives, NOT their bosses! I mean, seriously, “Do you love your children or not?”

You either want to be married and have kids OR you want to have a full-time “career”, sans children. Don’t drive yourself crazy, because despite what lesbian-led, radical, second-wave feminists tell you, YOU CANNOT HAVE BOTH, SUCCESSFULLY!

In case you are interested in some of the experiences suffered by young feminists fruitlessly trying to balance family and career, Jennifer O’Neill’s article follows. 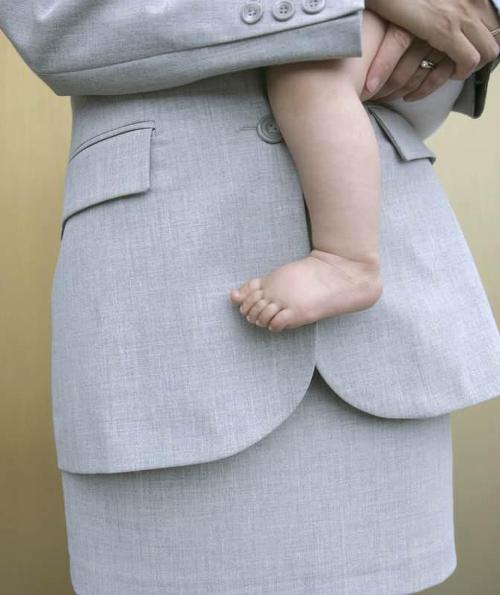 Every working mother remembers the moment — the first time she slips off the tightrope she’s been sprinting on between the two pillars of her life, career and kids. My fall to rock bottom was at 2am on a Tuesday. After toiling in the office well past midnight, I’d trudged home to prepare the lunch and snacks my children would need to bring to daycare first thing in the morning. Standing in the dim light of the kitchen while the rest of my family slept, I wearily steamed fresh apples and pureed them for the baby, boiled pasta and frozen veggies for the toddler, and reached into the fridge for milk to pour into their bottles. But the quart was empty. The kids would wake up crying for milk in a few short hours and we didn’t have a drop. I wanted to scream in frustration and smash the carton against the wall. What I actually did was shuffle into the living room, crumple into an exhausted heap on the floor next to a pile of toys no one had cleaned up, call for takeout of two bottles of milk, and weep.

According to new research, a great many women can relate.Care.com has given Yahoo Parenting an exclusive first look at its “Working Moms Tipping Point” survey, which reveals that one in four cry by themselves at least once a week due to household-related stress. “We wanted to understand what the point was where somebody raised their hand and said, ‘I can’t take it! I need help,’” Care.com cofounder Donna Levin tells Yahoo Parenting about the poll of nearly 1,000 employed women with at least one child under 18 living at home. “But just how far people push things surprised us.”

Working an average of 37 hours per week, respondents owned up to spending more than double that amount of time (80 hours per week!) slaving away at home on chores, childcare, and cleaning. No wonder a staggering 80 percent admit trying to keep up with it all is severely stressing them out.

STORY: The ‘Working Mom Penalty’ Hurts Us All

The worst part? Some of this pain is actually self-inflicted. Even though 11 percent of the women confess they’re afraid that their hectic schedules are preventing them from making lasting connections with their children, 29 percent refuse to hire any outside help because they feel guilty about not being able to do it all themselves.

What’s happening to their family life as a result isn’t pretty. Forty-four percent of these women’s families sit down together for dinner less than five nights a week. And when they do, a third say meals last less than 20 minutes. Couple time isn’t any better. The women reported spending just six hours alone with their partners each week.

“We want to share the data so people can realize that they’re not alone,” Levin says. “The survey found that 62 percent of women think everyone else has an easier time getting everything done and somehow they’re the only ones having trouble. This grass-is-greener mentality has to stop.”

Instead of comparing yourself to friends, health psychologist Dr. Alice Domar recommends commiserating. “People experience stress relief just talking about their problems,” Domar, the executive director of theDomar Center for Mind/Body Health in Waltham, Mass., and associate professor at Harvard Medical School, tells Yahoo Parenting. “There’s an Asian expression that ‘a burden shared is halved.’ If something is bothering you, tell a friend.”

It’s really not something you can ignore, anyway, considering the enormous toll stress takes on your body: Insomnia, headaches, neck and back pain, gastrointestinal issues, joint aches, and heart palpitations are just a few of the physical symptoms of stress that can eventually develop into hypertension, hastened aging, coronary artery disease, and suppressed immune function down the line.

Working moms may not be able to change the stressors in their lives, but they can change their body’s response to the stress by using relaxation techniques. Domar, whose book “Healing Mind, Healthy Woman” addresses just that, prescribes a few easy fixes that can make a big difference. “It’s hard to do,” she admits. “But you have to take care of yourself.”

Connect with friends. “It’s especially tough these days for working moms, because they’re so busy they don’t have the time for relationships with women that they used to have,” Domar acknowledges. “But lack of social support is actually more likely to kill you than things like cigarette smoke or increased blood pressure.” And it doesn’t have to be a two-hour heart-to-heart, she adds. “Little bits of conversation and connection throughout the day is fine too.”

Start writing in a journal. When you’re upset, writing about thoughts and feelings allows your body to interpret stress in a different way, says Domar. “Research has found that when we talk about things, they’re frozen in time,” she explains. “When we write about them, on the other hand, it helps us get over them.” So if you’re upset and only have five minutes to yourself to deal, write about it. “If you vent to someone,” she notes, “you’ll just get more agitated as you repeat the story.”

Lace up and walk. The women surveyed said three hours is all they have to themselves each day, but Domar says that’s still plenty of time to reduce stress with a short stroll. “Walk to the farther bathroom,” she advises. “Take a lap around the office. Do two-for-one specials and walk with a friend. You’ll get a bit of exercise and time to talk. Every little thing you do helps.”

4 thoughts on “Short Essay – Why Are Working Mothers, with Minor Children, Burning the Candle at Both Ends?”