Julia Pierson, 55, being sworn in as Director of the Secret Service. She was hired in 1983.

This serious breach of Secret Service regulations occurred in April of 2012, just prior to President Obama’s arrival for the 6th Summit of the America’s Conference in South America.

The second female Secret Service agent pretending to be in charge, is Paula Reid, who was the errant agent’s boss and head of the Secret Service’s Field Office in Miami. No more needs to be said about her ineffectiveness.

Now, back to Ms. Julia Pierson. She was sworn in as Director of Secret Service in March of 2013 after former Director Mark Sullivan resigned. Her task? She was to improve the image of the department in the aftermath of, not only the Columbia scandal, but the never-ending list of security breaches that had plagued the Secret Service during the Obama Administration.

These incidents included the gate-crashers, Tareq Salahri and his wife, who got past the third female Secret Service agent pretending to be in charge in 2009. This black woman failed to check the guest list for a White House State Dinner for the Prime Minister of India. Her serious dereliction of duty allowed the uninvited couple to enter the room where President Obama and the Prime Minister were conversing.

The next breach occurred when a  gunman fired seven bullets into the White House in 2011. And, as the new Director, Ms. Pierson was to also address a chronic, and ongoing, threat to the President and his family. During Obama’s six-year presidency, there had been, SIXTEEN incidents where individuals had breached the White House fence.

But, just eighteen months after Ms. Pierson’s appointment as Director of the Secret Service, she failed miserably in this last assignment. On Friday, September 27th, under her watch, the worst breach of the White House, in peacetime American history, took place.

On that day, Omar J. Gonzalez, 42, jumped the White House fence, charged across 70 yards of lawn, overwhelmed the fourth female Secret Service agent pretending to be in charge, who was “guarding” the front door and plowed through the unlocked door on the North Portico.

Gonzalez ran through the vestibule raced towards the East Room and then retraced his steps, heading back towards the stairs to the second floor. The female, front door “guard”, managed to draw her gun but did not recover her senses before a male Secret Service agent, who just happened to be coming down the stairs, saw the intruder, tackled and subdued him. 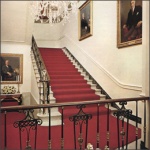 Gonzalez was carrying a butcher knife and had 800 rounds of ammo in his car. He claimed that he wanted to warn the President that the sky was falling.

If it were not for happenstance, and the fact that the agent coming down the stairs was a big guy, Omar, if laced with body bombs, could have blown the White House to smithereens!

And, although the President and his wife were away at the time, their two daughters were in the White House when Omar knocked the female Secret Service agent to the ground and entered the building. This was an egregious breach of White House security and would result in Ms. Pierson’s resignation.

Every female, involved in these four situations, screams incompetence. Only a PC, radical, second-wave feminist (whether male or female) would assign a girl to watch the front door of the White House! Women are not physically, emotionally or temperamentally suited for guard duty, of any kind, whether implemented from an administrative office or from the front lines!!! In addition, women fail to recognize evil, even if it is staring them in the face. They lack the natural instincts to detect evil in others. And why is that? Because they were not designed by God to tackle, shoot or do battle with other men! And who comprises the majority of criminals? Right, MEN. Big men.

his basic instinct for self-preservation, in the presence of evil, is instinctive in Christian men because God created them specifically to protect the innocent from evil. Christian men’s innate physical, mental and spiritual combativeness towards evil produced the illustrious history of Western Civilization, and through their honorable efforts, the subjugation of evil throughout the world. That is, until radical, second-wave feminism screeched its way to the forefront, in the late 1960s and early 1970s, by irrationally denigrating Christian men for following those very same, God-given, directives.

Today, we are living with the twisted results of our country’s wholesale adoption of the psychotic ideology of radical feminism, as highlighted by the outrageous failures of the four, feminist, FEMALE, “Secret Service agents” mentioned above.

This perverse, and exceedingly dangerous, politically correct, placement of unqualified women in positions of authority, just to salve the egos of the lesbian-led, radical, second-wave feminists, is going to one day, prove to be disastrous!

It is obvious that this PC BS, feminist “knowing”, has infiltrated our highest levels of national security with telling and heart-stopping near misses. And, until Christian men finally recognize this feminist crap for what it really is, (and it has NOTHING to do with equality) the threats will continue to escalate because the truth is, that without Christian men at the helm, no one is really in charge!