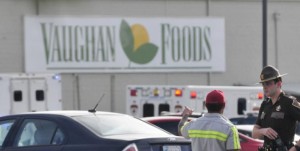 Moore, Oklahoma suffered another horrific tragedy, with the slaughter of a female employee at Vaughan Foods, last Friday. It would come, just over a year, after the town was hit by an F5 (largest) tornado on May 20, 2013.

The tornado left a 17 mile swath of destruction. It caused 2 billion dollars worth of damage, injured 337 people and killed 24 others, including seven, eight-year-old third graders, who were at school in the Plaza Towers Elementary School, when it was completely destroyed.

But, the tornado didn’t just produce record winds, and unprecedented destruction, it produced heroes, as well, just as the tragedy at Vaughan Foods did on Friday. Mark Vaughan, President and COO of Vaughan Foods is, like so many of the good Christian men, who became heroes during the melee caused by the tornado, a husband, father, employer, Boy Scout Troop leader, but more importantly, this hero was at work, and he was armed and prepared for anything. 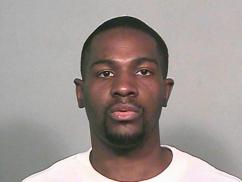 Alton Nolen, 30, on the other hand, just like so many black thugs who seethe with irrational rage, and misdirected hatred, for white people, had a rap sheet (including an assault on a State Trooper) and a reputation for violence.

Nolen’s unsuccessful efforts to convert Vaughan Foods’ employees to Islam, and his termination on Thursday, would collide to create one of the most horrific, and violent, crimes, perpetrated on innocent victims, in American history.

In Nolen’s quest for demented revenge, and in copycat  ISIS style, he returned to Vaughan Food’s front office as a Muslim jihadist and violently attacked, and then beheaded, Colleen Hufford, 54, before attacking Traci Jackson, 43, with the same butcher knife.

The unprovoked attacks spawn dozens of 911 calls. And, as the calls poured into the Oklahoma County’s Sheriff’s office dispatcher, the hysteria and horror of screaming employees could be heard in the background. And then, within moments, shots rang out, and all went silent.

Mark Vaughan became a hero that Friday in Moore, Oklahoma, just as did the heroes of the tornado not long before. Mr. Vaughan is a reserve deputy for the Oklahoma County Sheriff’s Department. And, while his employees were running for their lives, he grabbed his rifle and charged into the melee.

He took aim at Nolen, who was stabbing Traci Johnson in a vicious rage, shooting him several times in the head and body. Nolen went down and, unfortunately, is recovering from his wounds in a local hospital.

Colleen Hufford would not be so lucky. Not only was she brutally stabbed but once dead, Nolen severed his former co-worker’s head. This was done in the violent tradition of Islam Jihad. As Christian, Colleen is considered by Sharia law to be an “infidel” and deserved to die. Traci Johnson, was critically injured, but is expected to recover from her wounds. Although how she will ever recover from the demonic attack to which she was subjected, one can only imagine.

Mark Vaughan is now a national hero. If it were not for his courage, Traci Johnson would most certainly have been killed and who knows how many other employees would have been maimed, or killed, as well.

Mr. Vaughan put an end to Nolen’s rampage with cool, and calm, determination. Our country is routinely blessed with heroic men who charge towards disaster, while everyone else runs for their lives.  Moore, Oklahoma is blessed once again with another hero and this time his name is Mark Vaughan.

These courageous Christian men, whether rescuing an injured child in the aftermath of a tornado or defending their employees from a Muslim maniac

are, at first glance, just your ordinary garden variety American male. Men who live quietly among us as husbands, fathers, brothers, uncles and nephews. They are the same Christian men who love and support their families, and communities, in untold ways, every day of their lives.

Knowing that these same Clark Kents’ will, when the need arises, suddenly become Supermen, is of great consolation to those of us who understand their constant vigilance. Their preparedness is why we, as Americans, sleep so well at night.

Last Friday, Moore Oklahoma, and especially the employees of Vaughan Foods, were blessed to discover another Superman in their midst, and his name was Mark Vaughan.

Mark was just another garden variety Clark Kent by day, who, thank God, lived by the Boy Scout credo that says – Always Be Prepared – and became Superman, in the blink of an eye.