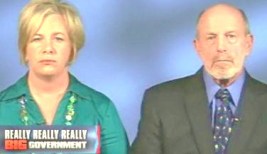 Non-Christians Dr. Herbert Hodes and his partner, and daughter, Dr. Traci Lynn Hauser operate “The Center for Women’s Health” on College Blvd. in Overland Park, Kansas. As you can guess, whenever “Women’s Health” is included in the name of a clinic, its code for abortion clinic.

Just before Kansas’ new 2013 Pro-Life Protection Act was to go into effect last June, Hodes and Hauser filed a law suit in opposition to it. They claimed that it violated a provision of the Kansas Constitution which stated that all legislation must address a “single subject.”

In addition, the doctor’s two female, radical, second-wave feminist lawyers, Rene Netherton and Teresa Woody, stated that the two provisions of the law, listed below, did not mention the word “abortion” and were therefore two new subjects. It was their contention that their inclusion nullified the law.

These two deplorable excuses for women, also claimed that the new law was a “sham” because it made it nearly impossible for existing abortionists to get the new licenses by the effective date. Luckily, Judge Crotty didn’t buy any of it. She not only rejected their claims, but their lawsuit requesting a permanent injunction against the entire law, as well.

Judge Crotty let the Pro-Life Protection Act go into effect while this case was being heard. The new law prohibits abortionists from providing instructors, or materials, for public school courses on sexuality. It also blocks tax breaks for abortion providers and sex-selection abortions (yikes). Abortion providers must also stipulate on their websites what alternative services are available, before the pregnancy is terminated.  It’s obvious from this list, that only an abortionist could possibly object to these new provisions.

Although this is not the end of this father daughter death teams various challenges to the new law, it is the end of this chapter. I certainly hope that Judge Crotty continues to deny the two remaining changes that were requested by these two abortionists.

It’s wonderful to finally be able to write about a truly admirable female judge. One who does not view the world through the hate-filled filter of radical, second-wave feminism. One who actually sticks to the law, rather than taking every opportunity to rewrite it, according to the twisted views of non-Christian, Gloria Steinem.