Writing about the murder of a little child is always heart-wrenching. My soul bleeds for these innocent babies but, when they die at the hands of their own mother, my grief is tainted with fury. How could a woman kill her own child? It is an unspeakable act and yet, today, it happens all the time! To be encouraged by society to abort an unborn child is reprehensible enough, but to actually kill your little 9-year-old son? I am left seething and at a loss for words to explain it!

The Varela-Casaus case has all of the classic sidebars to this type of tragedy – broken homes, dysfunctional families, drug addiction, child abuse, illegitimacy and promiscuity. It is a lethal concoction made in Hell, especially for small children.

Synthia Varela-Casaus, 38, who lives in Albuquerque, New Mexico, started abusing drugs at the age of 15. According to her stepmother, she moved in with a local drug dealer, while she was still a teenager.  An addiction to methadone eventually consumed her life. Over a 14 year period she was arrested 20 times for everything from methadone possession to prostitution. This, once beautiful, young woman would gradually devolve into a meth-addicted monster, capable of murder.

Little Omaree Varela was cursed from the day he was born to his foul mother. By the time of his birth, Ms.Varela had already given up her first child to her stepmother’s care. Omaree would not be so lucky. Instead, he would be subjected to the abuse and outbursts of his mother’s various boyfriends until his life became a living hell when she chose to marry Steve Casaus.

In June of 2013, Omaree was being so badly abused that he managed to dial 911 during the tirade in hopes that someone would come and rescue him.  Steve Casaus was unaware of the open phone line to the police dispatcher as he viciously raged at little Omaree.

The following is the transcript of his violent verbal assault on the boy, along with his mother’s interjections as well –

Casaus, “I’m trying to teach the (expletive) something man.
You don’t want to learn. You want to live a hard life like that. Don’t you Omaree?
I swear I’m going to (expletive) have a nervous breakdown. Mainly because of this (expletive) right here. You make everybody sick around you Omaree. Everybody! You make me and your mom (expletive) sick man! I can’t stand you Omaree.
That’s not a (expletive) rug burn man.”

Varela-Casaus, “Not a (expletive) bruise either. That’s not a bruise. This doesn’t hurt. So don’t act like it hurts.”

Casaua, “He’s a (expletive.) Everything (expletive) hurts you.”

Varela-Casaus, “How can it hurt you one day and not the next day Omaree? It doesn’t, does it?! You just want attention right!? Right.”

Casaus responds, “Shut the (expletive up) up before I really pop you hard man.”

Varela-Casaus says, “You caused this on yourself Omaree. Cause you don’t want to (expletive) change do you?”

Casaus continues, “And you want me to be your dad? (Expletive)you! I ain’t gonna be (expletive) to you. Don’t you even (expletive) look at me as our dad. (Expletive) you Omaree! (Expletive) you. Why don’t you (expletive) speak for yourself man! Speak man! Use your (expletive) voice! You don’t have nothing to say but (expletive) yes. Yes what?” “You make me so (expletive) sick Omaree. Not even my worst enemy has gotten me as mad as you. I never hated nobody like you in my life, ever. You know that Omaree. I hate you more than I ever hated anybody in my whole life. And I’ve been on this earth 41 years, and nobody made me feel the way you do Omaree — ever.”

(And we wonder why so many young men are violent and vicious. While being subjected to a lifetime of this type of unwarranted, verbal abuse, how could the outcome be any different?)

The dispatcher, who overheard the tirade, sent two officers to Omaree’s house. Unfortunately, these two cops dropped the ball. They failed to listen to the 911 tape, despite being told they should by the dispatcher. They spent just 15 minutes at the house, never wrote out a report and never called New Mexico’s CYFD (Children, Youths and Families Department). Although they can’t, in good conscience, be held responsible for Omaree’s death, (that responsibility lies solely with Synthia Varela-Casaus) it’s obvious that they probably could have done more. 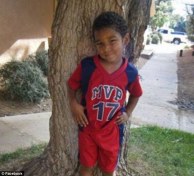 Six months later, Synthia Varela-Casaus was arrested for “stomping” 9-year-old Omaree to death. She told a local TV station reporter, as she was being transported to jail, “I didn’t do it. It wasn’t intentional. It was an accident. I was disciplining him. I kicked him the wrong way. It was an accident.” The little boy’s autopsy would find that Omaree had cigarette burns, lacerations, a bite mark and bruises all over his little body.

The  two officers, Scott McMurrough and Gill Vigil, were placed on leave while an internal investigation was undertaken.

I have no sympathy for Ms. Varela-Casaus. She is beyond contempt. This wretched woman is just another pathetic example of what becomes of women who choose to define their precious lives by the bad behavior associated with the wanton world of  radical, second and third-wave feminism and it’s associated world of secularism. She could have just as easily chosen to follow her Christian ancestors path and adopted the personal constraints instilled through Christianity. If she had, she would have found the true meaning of a happy life. Perhaps Varela-Casaus would have found the joy that God intended for all of His people and perhaps little Omaree would not have suffered a life filled with such profound pain and sorrow.

God love and keep this little boy safe with Him for eternity.

Update: On May 6, 2016 Synthia Valera-Casaus was sentenced to 40 years in jail for murdering her 9-year-old son, Omaree.