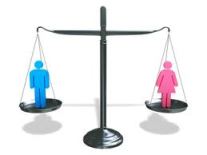 For decades, the miserable, second-wave feminists have insisted that men and women are “equal.” They have promulgated this unprecedented, and radical, concept from their bully pulpits at universities, in magazines or on TV.

These non-Christian troublemakers, including Gloria Steinem, Bella Abzug, Ruth Bader Ginsburg, Dianne Feinstein, Barbara Boxer and Betty Friedan, have loudly asserted that a woman could do anything a man could do, and in many cases, they expounded that women could do it better.

Most of their preposterous assertions were made in the effort to drive, supposedly “bored”, women out of their homes and into the workplace in order to finally achieve “equality” with men and “be all that they could be.”

In retrospect, most, or all, of their rantings were BS. Misguided views fraudulently based on their own dysfunctional lives. The truth is, thank God, that there is nothing similar, or “equal”, about men and women, or for that matter, girls and boys. They are simply different from one another, and for good reason!

As children, the differences are profound. Boys and girls learn in different ways. Their reading skills develop in different manners. Speech comes differently for both. Girls and boys are interested in different subjects. Their activity levels are not the same and their social skills are dissimilar.

plainly see the difference in a room full of pre-schoolers.

By nature, girls love everybody and they don’t care who wins. Boys, on the other hand, are more tempered in their view of people. Even at 3, boys know there are bad guys out there and they spend much of their play time fighting them off. Boys want to be heroes and show off their physical skills. Boys are rough and tumble and welcome physical challenges.

Girls, on the other hand, are smiley peacemakers, who want everyone to be happy and to get along – no matter what. The boys – they couldn’t care less about all of that. Even as little children, boys recognize evil and want to vanquish it, at all costs. And they don’t care if everybody is happy in the end. They just want the right outcome. The boys want the good guys to win.

And, despite what the radical feminists have espoused, when viewed through unfiltered eyes, the differences between men and women couldn’t be plainer either, which is why it’s taken nearly 50 years of brainwashing to delude the whole country away from the truth.

This brainwashing has been strident and all-encompassing. Children born in 1968 or later have been awash in feminist theory for their entire lives. These young people don’t know any other way of thinking or living. They don’t have a clue about what our Christian culture was like before radical feminism reared its ugly head in the late 1960s and early 1970s.

These misinformed individuals have grown up being told, through every venue available – schools, TV, movies, music, books and even friends and family – that there is something wrong with being male and something stupendous about being female.

The results of this preposterous hypothesis are unnerving. We are today surrounded by bitchy, opinionated, ill-informed young women and wimpy, self-conscious, silent young men.

These same diminished young men and loud-mouthed young women are the warped products of America’s wholesale adoption of the tenets of radical, second-wave feminism as irrefutable fact. This is what the ludicrous pretext of “equality” has produced and it’s all based on lies. Men are not bad. Women are not fabulous. They are just different.

Unfortunately, for most of these young people, it’s too late. The die has been cast. And, they are living proof of the foolishness of radical, second-wave feminism’s theories. Everyone is unhappy. Especially those men seeking strong marriages and families. Today, they can’t find a nice girl to marry and have children with because most young women have substituted the “ideals” of radical feminism for the tenets of their former Christian faith, with damning results.

The fact that radical feminism has institutionalised the ridiculous premise of “equality” based on the role-reversals, associated with “jobs”, is particularly crazy.

We now have women digging ditches and men changing diapers. WHY?  What purpose does switching roles serve? Where is the advantage to doing each other’s traditional jobs poorly?

Where is the upside? I don’t see one!

The business world is now swamped with irrelevant emotions and feelings, and home is full of domestic dysfunction and contentious resentment. How has this flip-over of male and female roles improved people’s lives at home? Or, better yet, how has it improved productivity, efficiency or the bottom line at work?

Whether the feminists like it or not, women were created with all of the vast expertise, emotions and disposition necessary to meet all of the constantly vacillating variables of daily family life. They are fabulous caregivers and nowhere is this more important than in the ever-evolving world of family life.

Today, radical feminism has denied this singular world to women. Instead, women are now exhausted, guilt-ridden, stress-out bitches trying to be everything to everyone, including their bosses and their families, and without much success.

On the other hand, whether the non-Christian feminists like it or not, men were created by God with all of the vast expertise, judgement and temperament to meet all of the challenges of the workplace. Men are fabulous team players and very determined and diligent, and nowhere is this more important than at work. Radical feminism has denied men this singular world as well. They are now browbeaten, self-conscious, disillusioned wimps trying to blend into a workplace awash with Brunhildas, who spend their days spewing irrational feminist “knowing”.

Men are at their best when they are focused on a particular goal, or challenge, at their place of work. They bring a calm steady hand, focus, determination and reason to the problems they must solve at work.

Women, on the other hand, are at their best when they are flexibly adapting to the ever-changing demands of caring for their families. They bring emotional solace, affection and reassurance to the overlapping problems they must solve at home and God has blessed them with the unique ability to mult-task, for just that reason.

Sure, men and women can switch roles but the outcomes always come-up short! Neither can do the other’s jobs as effectively because those roles were never intended to be swapped.

Men and women are not equally qualified to do each other’s jobs. Those roles were intended to be performed by those best-suited to meet the challenges of each sphere, and to think otherwise, is not only mind-boggling, it’s just plain ridiculous and pointless.

So, despite what the wacky feminists think, men and women are NOT “equal”, but instead quite different, and for thousands of good reasons. Both bring counter, conjoined and coordinating, traits to the table of life.

Married life, and life in general, is a balancing act of unequals, to which each man and woman contribute their uniquely different, and individually remarkable, attributes, thereby creating together, the whole of Christian human life.

It’s the Women, Not the Men!  to be continued…