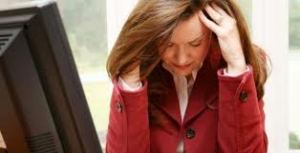 Only within the last few decades has the word “stress” become associated with the excessive level of anxiety present in so many people’s daily lives.

Oddly, despite our ability to personally confirm the existence of “stress” within our own lives, the dictionary still defines “stress”, only in terms of it being a noun, “pressure exerted on a material object” or, a verb, “give particular emphasis in a speech.”

We know from personal experience that chronic stress surrounds us each and every day. Many days are consumed with the nervousness associated with it. Stress can cause depression, frustration, irritability or a deep-seated sense of unease that can, over time, grind us down.

When did this chronic sense of aggravation begin? Where did it suddenly come from? Who was responsible for the sometimes overwhelming stress we experience? Why is it nearly inescapable?

You’ve probably suspected the answer. Yes, it began in the late 1960s with non-Christian feminists who founded radical, second-wave feminism.

It began when those very same young, gullible women were convinced to de-emphasize home, husband and children, while at the same time, over-emphasize “career”, “liberation” and “independence.”

As a result of this epic societal transformation, the traditional family responsibilities of each gender, as defined by our Creator (and which had always been equally divided between Christian husbands and wives) became a muddled and jumbled mess.

I’d rather be home!

Suddenly, no one knew who was responsible for what! And yet, family life moved along, just as it had done for thousands of years. The football game continued, but now the cheerleaders had the ball, and worse yet, they were making all the calls. Duh.

While radical feminism demanded the redistribution of those unavoidable, inevitable and demanding responsibilities of daily family life, Home Sweet Home disappeared under a fog of discontent, resentment and anger, along with good business practices at work.

I hate this job!

Ironically, no one was truly happy with the chaotic results of this social engineering project, other than the news media and yet, the naive and youthful baby boomers continued to persevere in this pointless pursuit of “equality” as though it were actually possible to rewrite human DNA. As a result, both men and women, were placed on the defensive while trying to personally re-invent the wheel.

OMG! What is she doing to my business?

Not only was traditional family life depleted with the exit of a full-time mother in pursuit of a “career”,  but the all-male business world was also placed under duress as it tried to adjust to the demands of its newly hired, college-educated female managers.

It soon became very obvious why we have Christian traditions! They make life easier.

Traditions are like parts in a play. Everybody knows their lines and, the responsibilities that come with that role. You know before you walk out onto the stage what is expected of you and you agree to play that part in advance or, you leave to find another play. Under radical, second-wave feminism’s influence, the actors want the screenwriters to rewrite the play to suit them, which causes nothing but chaos.

For centuries, traditional Christian, male and female, roles worked wonderfully. And, as a result, this traditional arrangement avoided the accusatory recriminations that are so prevalent in today’s relationships.

These traditional roles made it easier to hold someone truly accountable when things went wrong because husband’s and wife’s responsibilities rarely overlapped. And, they were not interchangeable.

Each understood their obligations and duties and they stood exposed and guilty when they failed to hold up their end of the bargain. No one could plead ignorance or innocence.

Today’s “liberated” women have suffered the most from this shuffling of traditional responsibilities, back and forth between husband and wife, because they are now, by choice, doing both the husband’s and the wife’s jobs.

These loons work outside the home AND they are still, rightfully, taking responsibility for the majority of the activities at home. And, the women can’t blame the men for this shift!

Even this picture looks ridiculous!

The men were perfectly content to be the SOLE bread-winner, before radical feminism rammed all these “liberated” feminists down their throats at work and dragged their wives out of their homes and into the workplace.

And, women can yak all they want about wanting the men to do more at home but, the truth is, that women really

Home is still their primary “territory” and as much as the husbands try to help, they can never do the household jobs as well as the women themselves can, because the women are only happy when their set of standards are maintained in their home.

So, leave him ALONE! Stop trying to blame him for your self-inflicted predicament! You alone are responsible for your stress. Unlike the irrational pronouncement of radical, second-wave feminism, you can’t have it all, without following the old, traditional Christian rule book, called the Bible. Husband works hard at his job away from the house and wife cares for the home and children. Now, that’s true equality.

The parameters that define a home were established thousands of years ago and they were solely based on women and children’s needs and priorities.

Where as the parameters surrounding the working world were based solely on men’s priorities. This was an incredibly productive and successful arrangement. And, both excelled in their God-given roles, to the mutual benefit of each other, but especially their children. 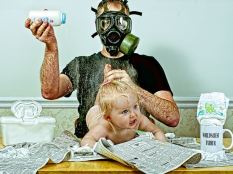 Honestly, men are not designed by God to be that helpful IN the home. And for good reason. Until, radical feminism reared its ugly head, It’s never been their responsibility.

As a result, they should NOT be hassled, harassed or intimidated into feeling guilty that they are not living-up to their wife’s standard of dusting, etc., or that they are not doing MORE vacuuming! They did not change the rules in the middle of the game  – THE WOMEN DID!

And so today, we have women trying to do everything themselves or, trying to force everyone else to do the impossible, while the guys stand painfully around and wonder how, and why, things went so terribly wrong.

They wonder what happened to “a man’s home is his castle”, when on most days, it appears the enemy has vaulted the walls and blown up the kitchen.

If the radical feminists had just left-well-enough-alone, everyone would be happier.

Luckily, the repentant, still-married, Christian mother still has a chance to get her life back in order. But only if she can concentrate solely on her family’s well-being, just circle-the-wagons and stop worrying about what her feminist “career women” girlfriends are going to think!

On the other hand, the idiots who divorced their inconvenient husbands at radical, second-wave feminism’s behest, are the biggest losers. These “liberated” women are doomed to a life defined by chronic, debilitating and never-ending stress because they have absolutely NO ONE to share the inevitable, and enormous, responsibilities that family life generates.

These know-it-all’s have no one covering-their-backs, when life throws a curve ball because the guys who once loved them are long gone, heartlessly tossed-out-on-their-ear for working long hours or not doing the dishes.

As “liberated”, arrogant, radical, second-wave feminists, these “emancipated” females got exactly what they asked for – and exactly what they deserved – a mountain of unnecessary unhappiness, defined by a life consumed by STRESS!

It’s the Women, Not the Men  to be continued,,,