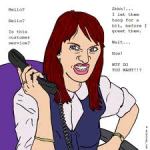 What do you want?

Have you ever wanted a simple answer to a question about your utility bill or a pending order? Have you ever innocently wanted to know what the directions were to a restaurant and were left on hold for twenty minutes? Or have you had the need to ask for the mailing address of a company? Have you ever been transferred to someone, only to have the operator disconnect you?

Have you ever been told that someone will return your phone call and they never do, only to find out they never got the message?  Or have you left a message asking for a return phone call and never received it. Has an operator promised to send an itemized list of  information you need and you never receive it? Or has someone told you they would check on something for you and never called back? Have you ever gotten off the phone and been infuriated by the ill-informed, untrained, stupid and rude behavior of the person answering the phone?

You’re not alone and, odds are, that nine times out of ten, you are dealing with a woman. It is nearly impossible to get women to do the jobs they’ve been hired to do. Mainly because they are too busy being busy-buddies and as a result, you can’t get them to do anything anymore!
And the reason for this phenomenon? Unlike forty-five years ago, workplaces are now defined by women’s priorities, not men’s.

Women don’t care about time-lines, schedules, deadlines or due dates. They don’t care about accomplishing the project at hand as quickly and efficiently as possible, nor do they care if the boss gets annoyed about their lack of interest in the goals and deadlines set by the company. Women have no interest in keeping the customer happy and certainly do not care about helping their company succeed. They have a notorious bag of excuses, and justifications, for their screw-ups that a man would be ashamed to acknowledge he’d actually thought of, much less voiced.

Men and women have completely different understandings as to what their job responsibilities represent. Rather than view their “careers” as a serious undertaking requiring their full-time, life-long attention, women view their jobs more like hobbies.

These females employees behave as though their jobs are just something to do to fill the time between personal phone calls, surfing the web, talking to friends, planning dinner dates, texting their kids, reading about movie stars and discussing a recent episode of CSI, all of this while actually being paid to work.

I don’t care what you think!

If you do not get a return phone call, and you call back, pointing out their lack of responsiveness, rather than apologize, women get defensive and rude, as though you had some nerve asking them to do their JOB! There are people who bring an acute sense of indignation and rudeness with them to work and inevitably it’s a woman.

I have found that there is only one reason for their nasty attitude. Simply put, these highly defensive women don’t know what they are doing, and unfortunately for the companies they represent, they don’t care either. They are routinely found to be totally unqualified for their jobs and they use bitchiness as a defense mechanism.

These women live by the old saying, “The best offense is a good defense”, which does nothing to keep the business running smoothly and efficiently, nor does it help their customers keep their own busy schedule on track while they waste their valuable time attempting to, again and again, get an answer from a bitch who won’t do her job.

What do you say gentlemen – ready for some girl talk?

These women have lost their Christian politeness and should therefore be vanquished from the workplace post-haste. Remember, one rotten apple will spoil the barrel. If the bad apple isn’t tossed out, everyone suffers and eventually the good people will quit and move away from the turmoil, and the company is then, literally, left to rot. 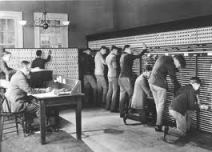 Qualified employees have no need to take a defensive attitude with anyone because, they are good at their jobs, and most of these good employees are usually uncomplicated, polite, helpful, well-informed, undemanding, easy-going, considerate, conscientious and responsible men.

If you want an efficient, peaceful and productive workplace, hire Christian men, not radical feminist women!