There are many “sins of the flesh” but radical, second-wave feminism’s “Sexual Revolution” has proliferated sexual promiscuity, in particular, to the point of insanity. And yet, it continues to spread, seemingly unchecked.

If there was ever a time when Our Lady’s warning – that more people go to hell because of sins of the flesh, than for any other reason – should be blasted across the internet, it’s today, as there are so many young people who have been denied this terrifying truth, by our profoundly secularized culture.

Our Lady’s admonitions were expressed through a little girl in Fatima, Portugal in 1920, but they seem more prophetic at the moment, than at any other time in recorded history. The story surrounding our Lady’s pronouncement began in the spring and summer of 1916 in the little village of Fatima, Portugal. 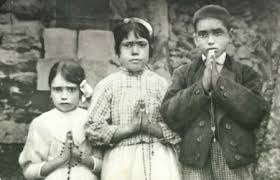 Three little, uneducated children, Lucia de Santos, 8 and her two cousins, Jacinta, 5 and Francisco Martos, 7, were shepherding their flock, in the hills near their home. Although they never spoke to anyone about their observations, they later claimed to have experienced the presence of an angel, on three separate occasions, during those months in the hills. The children said the angel taught them prayers, to spend time in adoration of the Lord and to make sacrifices.

The Children of Fatima with Our Lady

On May 13, 1917, rather than the angel, the children had an apparition of a beautiful lady. Lucia, then 9, described her as “brighter than the sun, shedding rays of light clearer and stronger than a crystal goblet filled with the most sparkling water and pierced by the burning rays of the sun.”

Although Lucia told Jacinta not to tell anyone about any of their apparitions, Jacinta could not hold her tongue about the beautiful lady in the hills. She finally told her mother about this new vision. Her mother mocked her and told other villagers about the whimsy her daughter had told her.

But soon, as word spread of the children’s continuing visions, not only did the local villagers walk to the location of the sighting, but thousands of people from the surrounding countryside arrived as well.

Our Lady appeared to the children 6 times, although Lucia, who became a nun and lived to be 97, was to see Our Lady a few additional times during her life.

When the Lady first appeared, the world was embroiled in the First World War. And, the children said one of the things that Our Lady told them was that there was an urgent need for the “Consecration of Russia to the Immaculate Heart of Mary.” As the crowds rose into the thousands, the exasperated local constable arrested the three children claiming that the children’s behavior was political in nature, rather than divine.

In an effort to prove his point, the constable threatened to “boil them in oil” if the children did not reveal “The Three Secrets” that the children claimed Our Lady had told them. They all refused. Their Lady had not come as a politician. She came as a warning.

The befuddled constable finally released the children from jail but not before they led the inmates in saying the Rosary, which the Lady bade the children, and the world, to say every day.

The Children of Fatima’s Vision of Hell

And, as though to prove the constable very wrong, many miracles, apparitions, visions and warnings followed, including, for the children, a terrifying view of hell. Many of these warnings had to do with the international turmoil of the day but one warning was more applicable to today’s radical, third-wave feminists, than it was to those who lived on earth in 1917.

During Our Lady’s second apparition, on June 13, 1917, Lucia asked if the children would go to Heaven and Mary replied, “Yes, I shall take Francisco and Jacinta soon, but you will remain a little longer, since Jesus wishes you to make me known and loved on Earth. He wishes also for you to establish devotion in the world to my Immaculate Heart.”

Just as foretold, both Francisco (1907-1919) and Jacinta (1910-1920) would die soon after, during the Spanish Influenza Epidemic. But, before Jacinta’s death on February 20, 1920, at the age of 10, she revealed additional details of the children’s conversation with Our Lady.

This is when little Jacinta revealed what Our Lady said about the sins of the flesh:

More souls go to hell because of sins of the flesh than for any other reason. Certain fashions will be introduced that will offend Our Lord very much. Many marriages are not good; they do not please Our Lord and are not of God. Priests must be pure, very pure. They should not busy themselves with anything except what concerns the Church and souls. The disobedience of priests to their superiors and to the Holy Father is very displeasing to Our Lord. The Blessed Mother can no longer restrain the hand of her Divine Son from striking the world with just punishment for its many crimes.

Beyond her prophetic commentary about priests, she was describing American women, who are living under the corrosive influence of radical, second and third-wave feminism, at this very moment!

Pray for the release of these ignorant women, and defiled priests, from this ideological curse, promulgated by the feminist’s “Sexual Revolution.”

5 thoughts on “Short Essay – What Did Our Lady of Fatima Say About the Sins of the Flesh?”