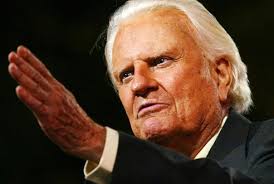 Billy Graham’s wife Ruth died in 2007. And although he wrote the  following letter in 2012, it still rings true today. Please pray for Christian America on the 4th of July. We must persevere in our belief that America’s traditions, based on the tenets of Christianity, are the best hope for the future of this country and the world. kqd

“Some years ago, my wife, Ruth, was reading the draft of a book I was writing. When she finished a section describing the terrible downward spiral of our nation’s moral standards and the idolatry of worshiping false gods such as technology and sex, she startled me by exclaiming, “If God doesn’t punish America, He’ll have to apologize to Sodom and Gomorrah.”

She was probably thinking of a passage in Ezekiel where God tells why He brought those cities to ruin. “Now this was the sin of … Sodom: She and her daughters were arrogant, overfed and unconcerned; they did not help the poor and needy. They were haughty and did detestable things before me. Therefore I did away with them as you have seen” (Ezekiel 16:49–50, NIV).

I wonder what Ruth would think of America if she were alive today. In the years since she made that remark, millions of babies have been aborted and our nation seems largely unconcerned. Self-centered indulgence, pride, and a lack of shame over sin are now emblems of the American lifestyle.

Just a few weeks ago in a prominent city in the South, Christian chaplains who serve the police department were ordered to no longer mention the Name of Jesus in prayer. It was reported that during a recent police-sponsored event, the only person allowed to pray was someone who addressed “the being in the room.” Similar scenarios are now commonplace in towns across America. Our society strives to avoid any possibility of offending anyone—except God.

Yet the farther we get from God, the more the world spirals out of control.

My heart aches for America and its deceived people. The wonderful news is that our Lord is a God of mercy, and He responds to repentance. In Jonah’s day, Nineveh was the lone world superpower—wealthy, unconcerned, and self-centered. When the Prophet Jonah finally traveled to Nineveh and proclaimed God’s warning, people heard and repented.

I believe the same thing can happen once again, this time in our nation. It’s something I long for, and my son Franklin recently shared a vision for perhaps the greatest challenge in the history of the Billy Graham Evangelistic Association—to launch an outreach called My Hope with Billy Graham  that would bring the Gospel into neighborhoods and homes in every corner of America next year.

BGEA has already taken My Hope to more than 50 nations. We’ve worked in close partnership with local churches across each country, and those churches have reported millions of life-changing decisions for Christ. Carrying out a nationwide American version of this evangelistic outreach will be an enormous undertaking, but in my spirit I know God has called us to do this, and I pray He will stir your heart to join us in prayer and support.

Franklin will share more about the project with you as the planning develops. In the meantime, all this year Franklin and his son Will are preaching “repentance toward God and faith in our Lord Jesus Christ” (Acts 20:21, ESV) at Crusade events across North America—from Texas to Canada—and God has blessed the work. Already tens of thousands have heard the Gospel, and many have responded, especially young people.

As I write, I am in the middle of a busy summer enjoying visits with many of my grandchildren and other family members, but also working hard on a new book that addresses some dangerous illusions about eternal salvation that are becoming increasingly accepted in many places. I want to point the world to what the Bible says.

Although age and health restrict my mobility and my stamina, not to mention my eyesight and hearing, I am thankful for the days God has given me, and I am humbled by His continued hand of favor on the Billy Graham Evangelistic Association. The Lord draws people to Himself daily through BGEA’s various evangelistic ministries, and I am so deeply grateful.

May God bless you,