Until the eruption of radical, second-wave feminism in the late 1960s, women had always deferred to the men in their lives when any major decision had to be made. Whether it had to

do with money, moving, faith, discipline of children, work, family matters, education or in many cases their very survival, they trusted their men to make the right decision. Women had plenty of other things at home to be concerned with, letting their husbands make the big decisions made their lives easier.  And so, finding a good husband was a primary goal for most women.

Contemplating the idea of having to remain single was, in many cases, frightening. Women did not want to spend their lives alone and unprotected. They feared becoming, what we now call, a spinster. There were legitimate reasons for these concerns. They would be unable to have their own children. They would be forced to live a financially depleted life. They would live a loveless live. They would remain a burden to their parents.  They would live a very, very limited existence and eventually become irrelevant.

As a result, Christian women were never trained to fend for themselves because it was a totally alien concept. Why would any woman deliberately choose to spend her life alone, without a husband and children? In addition, trying to live a life unprotected by a loving husband could, in an unpredictible world, prove fatal. There just weren’t any upsides to a woman remaining single or trying to support herself alone.

I trust your decision.

Christian women not only depended on their men for protection, they trusted them to tell the truth, whether it had to do with their relationship, safety or daily lives. And thousands of years of experience had proven that they could trust their men’s judgement because their men loved them and wanted what was best for them. For women, following their husband’s lead had always been the best and most practical plan of action. It guaranteed accomplishing nearly everything they hoped for in their lives.

Over the last fifty years we have seen this innate  and positive “following” instinct in women go awry. This natural devotion to, and trust in, men has morphed into cultist behavior. Whether it occurs on a relatively innocuous level with screaming groups of girls waiting to see Elvis perform or it occurs at the other

extreme with the Charles Manson’s groupies murdering innocent people at his behest, the results are unnerving and in many cases unexplainable. Radical feminism has created a new form of this female cult mentality, and its destructive power is unprecedented because unlike any other time in history, it has completely alienated women from men. Until recently, this was thought to be impossible, by both men and women.

Only women are susceptible to this female cult mentality. Interestingly, the reverse has never been the case. Men do not become irrational groupies. Other than in the fictional worlds of movies, books and radical feminism there are no recorded cases of cults led by women with groups of men becoming their unthinking followers.

The combination of exceedingly vulnerable women and narcissistic men inevitably comprises a cult. Radical feminism combined exceedingly vulnerable young college women with narcissistic older women who also suffered from an irrational, persecution complex. This was augmented by the news industry’s promotion of feminism’s gripes as though they were based in reality. The TV industry in particular, which was in it’s infancy,  deceptively chose to view it as a newsworthy ideology, rather than an senseless rant.

Radical feminism forces its members to suppress their innate need for male approval. This subconscious denial creates conflicted women with aggressive natures and chaotic lives. Women cannot get along without real men because from a practical standpoint, and despite the feminist spiel to the contrary, they can’t repair their roof or fix their cars or do just about anything else to maintain the built world but more importantly they cannot replace the love they crave because only men can fulfill that essential female need.

Second-wave radical feminists have taken their irrational blame game to new levels of insanity with their “in-your-face” attitude and obnoxious behavior directed towards unsuspecting and blameless men. Nothing in their lives makes sense once they’re enveloped themselves in radical feminist ideology. They lose their moral compass and are adrift in an imaginary world of hate and resentment. They become a square peg in a round hole.

Radical feminism is the most insidious example of female cult mentality. Even the doomed religious cult of Jim Jones started

with the positive notion of love for each other. And despite those good intentions, the cult destroyed itself. On the other hand, radical feminism was created on college campus’ in the late 1960s and early 1970s on the false premise that men were oppressors and dominators of women, especially of married women. These young, naïve collegiates were promised liberation from their imaginary oppressors, and through higher education, the jobs to accomplish this goal. They were indoctrinated to believe that the world was waiting at their feet and that both sexual and financial independence was in their best interest, allowing them to avoid the “crippling net” of marriage. Unfortunately at the time, these young women were beyond their parents reach and slipped, unfettered, off the precipice into irrelevancy, just as with the spinsters of old. 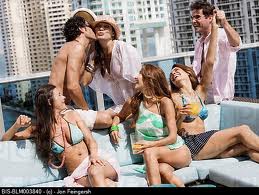 With millions and millions of young women committed to their new emancipation, their cult mentality overwhelmed Christian America. Women were no longer setting the highest standards of behavior, instead they were embracing the worst behavior known to man. Hail the cursed cult!

Once established in the workplace, there was no arguing with these brainwashed extremists. They had become irrational, unthinking believers. Mass hysteria became the new normal as liberated feminists  raced to the finish line, shedding every bit of decorum, tradition, respectability, civility, security, class, dignity and stability their male ancestors had worked so hard to give them “I Am Woman Hear Me Roar”.

Pathetically, they became their own worst enemy. Most became slayers of windmills, howling miserably into the darkness while stunned fathers, brothers and husbands looked on in disbelief.