Simply put, without Christian women, civility cannot exist. Without the high standards of behavior to which Christian women hold themselves, all else regresses. Without young Christian women’s virtuous, and upstanding behavior, young men devolve as well.

When 35 million young, female baby boomers substituted the ideology of radical, second-wave feminism for the tenets of their Christian faith, while attending college during the late 1960s and early 1970s, Christian civility immediately began to disappear.

Just one generation earlier, and for hundreds of generations before them, Christian women were the purveyors of propriety.

The female baby boomers would betray them all, while under the influence of non-Christian, anti-Christian feminist anarchists.

And, as a result, Christian women taught generation after generation of their young daughters that Christian women were never to entice, or tempt, men into sinful behavior, thereby sustaining Western Civilization, and the civility that defined it.

Christian women’s crucial role in the advancement, and perpetuation, of civility among humankind cannot be overstated.

Without these virtuous women’s profound influence on the behavior of their own family members, as well as that of their neighbors and acquaintances, Christian Western Civilization would never have come to fruition because men would have lacked the revered, feminine inspiration that was necessary to unceaselessly strive for the advancement of mankind in their name.

Today, this is no longer the case, as the demented, debauched and convoluted generation of female baby boomers have instead, left a legacy of depleted behavior espoused by the twisted ideology of radical, second and third-wave feminism. And, as a result, we are witnessing the total destruction of Christian civility within our once illustrious Christian nation.

Sadly, the men of the baby boomer generation have proven themselves to be useless in stemming this fallacious feminist tide. A tide, which has washed over America, mainly because their “inspiration” has come from that same generation of brainwashed, debauched and perverted female feminist baby boomers to whom I refer.

Rather than vocally attempting to offset the raunchy ravages of feminism, this cowardly generation of men have instead, enabled it, and actually ENCOURAGED it, thereby sending both to hell.

My only hope for our Christian future now lies in the hands of our male children and grandchildren. The very same innocent victims of their baby boomer ancestor’s debauched behavior, including their despicable lack of interest in their children’s future, their lack of self-control, personal responsibility and reverence for God’s 10 Commandments.

Sadly, unlike the spoiled baby boomers, these young men will one day inherit a depleted America. An America that all of our Christian ancestors would never recognize. An America destroyed, and compromised, by the miserable decisions made by female baby boomers awash in fraudulent feminism.

Feminist-infected decisions which have led to our degradation as a nation and as a society. A disgraced, and impotent, nation where astoundingly, we are today witness to the actual PERSECUTION of good Christians, who continue to try to hold themselves to the high standards of behavior demanded by God, within the borders of

Pathetically, these “rejects” continue to do

It is time for the next generation of young men, within this pathetically weakened nation, to band together. They MUST emulate their brave Christian male ancestors of old and, just as did John Wayne, seek each other out, and once again, truly “enjoy the company of MEN” in Christ, because it is only though this brotherhood that young men can project a unified front, and begin to FIGHT BACK against the abject evil espoused by radical feminism.

It is time for these young men to reject and repel this exceedingly non-Christian feminist ideology. An unholy ideology, that the anti-Christian, female baby boomers have disingenuously promoted as good for women, while at the same time, irrationally condemning the tenets of Christianity as bad for women.

It is time for young men to renew their faith in God, embrace Christ’s teachings and regain their rightful place as righteous Christian leaders within their families, communities and country.

Only then will America be salvaged from the vicious, anti-Christian, non-Christian anarchists, who are now controlling every level of our lives, through the irrational puppetry, and influence, of radical, FEMALE feminists within academia, military, politics, business, community, judiciary, organized religion and the family.

The good guys have silently stood by for decades, as they watched the female feminist baby boomer “leaders” take this country to hell through their internalization of the evil priorities espoused by radical. second and third-wave feminism.

Hillary Clinton, Angela Merkel and Theresa May are PERFECT examples of this Marxist feminist idiocy in action.

It is time for our YOUNG Christian men to LOUDLY condemn their father’s cowardness and exposed the irrational, twisted, feminist women for whom they truly are! The ENEMIES of Christianity and Western Civilization. 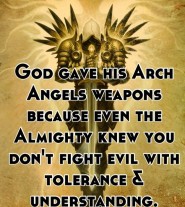 Only God can stop this pervasive evil. And only the righteousness of God, expressed through the strength and courage of confident young Christian men, can accomplish this critical task.

These young men MUST take up the sword of St. Michael the Archangel, and do battle with evil, despite its female form.

14 thoughts on “Short Essay – Why has Civility Ceased to Exist?”