I ask you this, “Do you remember Eve’s role in the loss of Paradise?”  Well, thanks to radical, second-wave feminism, Eve is again in bed with the devil and through these brainwashed women, Christian America is about to become Paradise Lost once more… 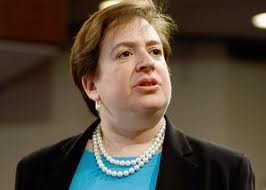 Kagan is Obama’s former Solicitor General. She worked on the defense of Obamacare before the Supreme Court and was seen openly cheering when the House passed Obamacare in March of 2010. That same year, President Obama nominated her to the United States Supreme Court. She was sworn in on August 7th. She is now an Associate Justice of the Court.

Here is a woman with an obvious and vested interest in Obamacare. And yet, in 2011, when 27 States came before the U.S. Supreme Court to challenge Obamacare’s constitutionality, Kagan refused to recuse herself from the case.

Considering her intense involvement with the creation of Obamacare, she should not only have recused herself from the case because there was a serious conflict of interest, but considering the fact that she was the former Dean of Law at Harvard, she knew she was honor bound to step down.  Or did she? Was she just ignorant or was it more likely that she didn’t care what the precedents were concerning conflicts of interest because, as a  non-Christian adherent to radical, second-wave feminism, it’s all about radical feminism’s agenda to seek retribution against white, Christian men, when and where they can. Precedents and the rule of law be damned. She had her shot, she took it and with the help of conservative Justice Roberts, the States lost their case.

Radical, second-wave feminists are solely motivated by a deep-seated hatred for Christian men, who they irrationally believe have “oppressed” and “domineered” women for centuries, “trapping” them into doing their bidding as wives and mothers. As a result, and by association, these women abhor all of the illustrious American institutions created by white, Christian men, including our military, government, business, education and organized religion. They care nothing for the U. S. Constitution, the Rule of Law, military

traditions, business standards, apolitical education, or the teachings of the Bible.  They strive to become the exception-to-the-rule, the odd-ball, the squeaky wheel that gets the most oil. They are contentious purveyors of conflict. Nothing else matters but their “opinion” about the injustices that they imagine  they’ve suffered and how they personally feel about an issue. They will resort to whatever it takes to destroy the traditional values of Christian men, even ignoring the truth.

Case in point – never in American history has the government been permitted to force Americans to BUY something. and yet that is what Kagan chose to hang-her-hat-on with regards to Obamacare. When the opposing lawyers from the 27 States pointed this out during the U. S. Supreme Court trial, they added, that the concept of forcing people to buy Obamacare was a form of coercion and therefore unconstitutional.

Kagan’s response belies the truth about the radical feminism’s destructive agenda and the tactics they use to get their way, when she said, “Why is a big gift from the federal government a matter of coercion? In other words, the federal government is here saying: We’re giving you a boatload of money. There are no matching funds required. There are no extraneous conditions attached to it. It’s just a boatload of federal money for you to take and spend on poor people’s healthcare. It doesn’t sound coercive to me, I have to tell you.”

What a ridiculously stupid question/statement! First of all, from where does she think the federal government gets its money? from donations, or maybe she thinks they pick it off the trees!  No, the truth is that the government’s ONLY source of revenue is from taxes. The taxes it squeezes from the American workers. And, other than that crazy billionaire Warren Buffett, I’ve never heard of anyone who gladly runs to the Post Office on April 15th and hands-over their hard-earned money gleefully. The truth is that Yes, it is coerced from the taxpayers. The IRS wouldn’t need 100,000 employees and a $10 billion budget if taxes were freely given to the government by the taxpayers. What an arrogant ignoramus!  Or is she just a radical, second-wave feminist at work.

Well, Elena, in case you are just an ignoramus, the last time a high school American History student checked, all the taxes do indeed come from the taxpayers –  the business owners, the producers and workers in America!!! They come from every hardworking American who is trying to scrape by and do what’s best for themselves and their family. They toil, while  idiots like you ignorantly live in La-La Land believing that federal funding actually originates with the federal government and therefore has no connection to the human sacrifice it truly requires to produce those funds. Radical, second-wave feminists routinely take this type of position, skipping over the truth, or worse yet, ignoring the truth concerning an issue, in order to destabilize an established Christian institution, while at the same time gaining ground for their leftist viewpoints.

Kagan is one of three radical, second-wave feminists, including Ruth Bader Ginsberg and Sonia Sotomayor, now on the U.S. Supreme Court. God helps us keep it to just three!